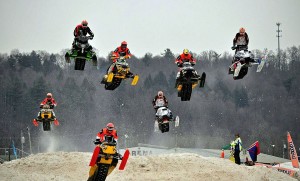 CHESHIRE, Conn. (March 18, 2014) – After months of intense competition, constant travel and hard work, the end is now in sight.

Snowmobile race teams from around the northeast are gearing up for a dramatic conclusion to the 2014 season, as East Coast Snocross (ECS) prepares for its season finale on Friday and Saturday, March 21-22, at the beautiful Titus Mountain Family Ski Center in Malone, New York.

This year’s season finale will repeat the format implemented last year, with racing under the lights Friday night to amplify the level of excitement. Spectator gates will open at 3 p.m. Friday, with racing getting under way at 4 p.m. with amateur qualifying rounds. Pro and Pro Lite riders will hit the track by 6 p.m. and contest their finals during the evening.

Gates will open at 10:30 a.m. on Saturday with amateur qualifying rounds already in progress. The finals will begin shortly after lunch and conclude by 3 p.m. Admission is $10 per day for adults; $8 for children ages 8-12, while children age 7 and under will be admitted free with a paying adult. Pit passes valid through the weekend will be available for an extra $5.

The 2014 Pro Lite title is coming down to the wire, with rookie sensation Hunter Patenaude holding onto a slim 12-point lead over Jesse James Bonaduce going into the finale. Hunter’s older brother Leo sits just 25 points behind Bonaduce in third and has momentum on his side. With a fine mix of veterans and talented rookies, 2013-14 was a very competitive season in the Pro Lite class.

There will be exciting points battles throughout the balance of classes in Malone, as well. ECS has enjoyed strong competition in its Junior and Women’s divisions all season, and we expect more of the same in Malone. Young racers in the 120cc classes will also have a chance to compete one last time in Malone.

Nestled in the northern Adirondack foothills, Titus Mountain is blessed with abundant natural snow and a sheltered, northeast-facing trail network. The mountain features 10 lifts serving 42 trails and glades, two terrain parks, a Learning Center and snow tubing park. The facility stretches across three mountains, with over 200 acres open for skiing and snowboarding.

East Coast Snocross, presented by AMSOIL and Woody’s Traction, is the eastern affiliate of International Series of Champions (ISOC), the national sanctioning body for snocross. ECS strives to maintain a regional circuit intended to keep grass-roots snocross racing healthy in this part of the Snowbelt, while also cultivating new talent for tomorrow’s factory-backed Pro teams.