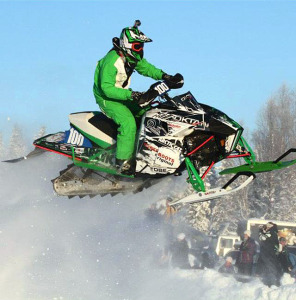 GLENVILLE, New York (Oct. 6, 2014) — With the national snocross opener now less than two
months away, another of the northeast’s premiere race teams is busy preparing for a five-rider assault
on tracks throughout the snowbelt.

All Seasons Arctic Cat Racing, based in Glenville, New York, has assembled a group of five
experienced and talented athletes to compete for class championships on the East Coast Snocross
(ECS) series. The team will also run in three national events on the International Series of Champions’
(ISOC) AMSOIL Championship Series.

Team owner Jim Kislowski has been involved with racing for many years. The 2014-15 season
brings change for him, yet his passion and enthusiasm for snocross bring a welcomed challenge.
“I’m going to miss working with Jesse James Bonaduce,” Kislowski said. “But I’m also excited
about the talent and potential of this new team. I have to offer a special thanks to All Seasons Arctic
Cat, New York’s oldest Arctic Cat dealer. We look forward to representing them and the Arctic Cat
brand with pride here in the northeast.”

With an international flair and great depth of talent under his guidance, team manager Nate
Tatro says he’s excited about the goals this fine group of riders can accomplish.
“I think we’ve put together a pretty solid package for the coming season,” Tatro said. “I know
that Cassidy and Theresa have the talent to succeed with us, given their skills. I’m also very excited
about having Pontus join us this season; his record over in Sweden is pretty impressive. He’ll be a great addition to an already strong team. Bradley and Dalton have both developed as racers and are looking to run strong in their classes. We’re all anxious to get our new sleds and begin a new season.”
Engstrom, 23, of Ostersund, Sweden, has enjoyed success in his native country since he started
in Junior classes. He notched multiple wins and titles in both snocross and hillcross before advancing to the next level. From 2010 through 2012, Engstrom recorded numerous wins and podiums in the
Swedish Championship Series. His skills are not to be taken lightly, and he could easily be a factor in
the ECS Pro Lite title fight in 2015.

Kislowski, 17, of Glenville, NY, won 10 finals in 2011-12 on her way to earning the Women’s
Jr. Novice championship. The following season, she finished third at the ISOC Nationals in their Pro
Am Women’s class. Last winter, Cassidy suffered a severe injury during the ISOC season opener in
Duluth. She did, however, go on to compete in the ECS opener in Rumney, NH, where she won her
first final. She sat out the remainder of the season to complete the healing/rehabilitation process. “I’m very excited to get back on an Arctic Cat this season,” Kislowski said. “I’m feeling 100
percent phyically now and can’t wait to compete again. My father purchased a new truck and trailer;
all we need now is snow, the awesome new ZR and we’ll be set to go. I’m hoping for a strong season.”
Bradley Tatro, 15, of Stamford, Vermont, started racing snocross in the old Rock Maple Racing
circuit in 2008-09. He earned his first podium finish in Epping, NH. in the Jr. 8-10 Freestyle class. He went on to fiinish sixth in final points. In 2009-10, Bradley won his first ISOC final in Salem, New
Hampshire. Last winter, he competed in the Jr. 16-17 class at just 14, yet managed to finish third in
overall points. Bradley also raced in the Sport class, where he ran consistently inside the top 10.
“My goal for the 2014-15 season is to become a faster and more mature rider,” Bradley said.
“My main focus will be on winning races and the championship. I hope to come out of this season
with a title under my belt, knowing I did my best to win.”

Dalton Tatro, 13, started his snocross career in 2011-12 in the Jr. 8-10 500cc class and finished
second in the final point standings. He also competed in Jr. 10-13 380/500cc action and came away
fifth in final points. In 2014-15, Dalton will be racing in the Junior 10-13 500cc and 600cc classes.
“In the past two seasons, I’ve been focusing on my school work,” Dalton said. “I’m coming back
this winter with the intent of winning every class I enter. I’m very happy to be racing for All Seasons
Arctic Cat and feel confident our team will be competitive across the board, from Pro Lite down
through to Juniors and Pro Women. This should be a solid season for us.”

Max, 13, of Ottsville, Penn., has already been racing snowmobiles for nine years. She moved up
to the full-size track after five seasons of competing on a 120cc sled, where most of today’s top riders got their start. Theresa earned second and third-place finishes in the Women’s 600cc Novice class in 2013-14 and received the prestigious “Women’s Rising Star Award” from ECS officials in March.
The team will officially kick off its 2014-15 season on Thanksgiving weekend at the famed
AMSOIL Duluth National in Duluth, Minnesota. This provides a chance to shake down the new sleds
and “shake off the rust” before a new season begins in earnest in December.