2015 Triple Crown Series to begin in Bangor; practice track in the works for East Coast Snocross, presented by AMSOIL, Woody’s Traction and FXR 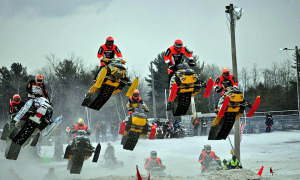 CLARKSBURG, Mass. (Nov. 12, 2014) – Officials at East Coast Snocross (ECS) are pleased to announce some exciting news regarding our season opener in the Great State of Maine.

On Jan. 10-11, 2015, teams from the Quebec-based SCMX series will compete against ECS riders in Round 1 of the Triple Crown Series. The Paul Bunyan International Sno-X will take on a truly international flair, as this rivalry delivers some of the best ski-to-ski racing ever seen in this region.

“The Triple Crown Series has been a huge deal since its inception a few years ago,” ECS General Manager Shawn Achilles said. “SCMX has several fast riders, but our athletes train hard so they can go out and beat them. This rivalry is friendly, yet it creates a chance to earn bragging rights on both sides of the border and snag a nice payday, as well. I think the 2015 edition will be very exciting.”

Round 2 of the Triple Crown Series we be held in Louiseville, Quebec, while Finals in all three classes will be run on Friday during the prestigious Ski-doo Grand Prix of Valcourt in mid-February.

In other news, race teams across New England will be thrilled to learn about a new practice track available to them. In a partnership between The River’s Edge facility owner David Bond and ECS, a full-sized practice track will be constructed at The River’s Edge in North Adams, Massachusetts. With the first major cold snap headed for New England later this week, snow-making equipment is being tested so that snow can be made as soon as the weather conditions allow.

“Having a track at their disposal for practice, testing and tuning will be of great value to our teams,” Achilles added. “Not everybody can travel out to Minnesota to practice in advance of Duluth, so we’re trying to offer a place to test in New England. While we can’t guarantee when it will be ready, we can say the equipment is in place to make it happen. We feel this is something that can benefit a number of teams as they prepare for and work through a new season.”

Other pre-season preparations include working with ISR to finalize the classes to be run in our Hillcross events this winter. That process is winding down, and interested racers are asked to keep an eye on the ECS Web site for details and specifics due out shortly. Hillcross is back at the famed ESPN Winter X Games, putting the sport in a global spotlight once again. It’s fast, it’s exciting, and we can’t wait to see sleds flying up the slope at Granite Gorge on Dec. 6-7.

Series officials are also pleased to announce the hiring of New York native Paul Szmal to handle Public Address duties. Szmal has announced snocross in the past with the old RMR circuit, and brings a polished voice to the job. We welcome Paul back to the sport and look forward to hearing him again.