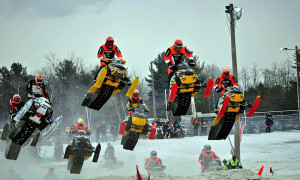 CLARKSBURG, Mass. (Mar. 17, 2015) – For the first time in three years, the sights and sounds of championship snowmobile racing return to Chautauqua county, as East Coast Snocross (ECS) prepares for its 2015 season finale on Saturday and Sunday, March 28-29, at the beautiful Peek ‘n Peak Resort in Findley Lake, New York.

Spectator gates open at 9 a.m. each day, with early qualifying rounds already in progress. Admission is $15 per day for adults, or $25 for a weekend pass. Children age 7 and under will be admitted free with a paying adult. Pit passes valid through the entire weekend will be available for an extra $10.

Leading the charge into Findley Lake is Pro division point leader Danny Poirier. The four-time champion (2004, 2009, 2012, 2014) from St. Theodore QC, is poised to secure his fifth championship aboard his Ingles Performance Ski-doo after a dominant season with multiple final round wins.

Swedish invader Johan Dahlgren is another Pro rider to watch as he chases Poirier in Findley Lake. Dahlgren is in the U.S. this winter riding for Team Southside/Polaris, and has been impressive all season. The Pro Open class has delivered great thrills for fans at every stop on the circuit.

Riders to watch in the talent-filled Pro Lite division include point leader Cody Paolella (Wallingford, CT/Polaris); Wade Acker (Bristol, VT/Ski-doo); and Chris Coleman (Albany, NY/Polaris). The Pro Lite riders will also compete in the Pro class at Peek ‘n Peak as they prepare for their first full-time Pro efforts in 2015-2016.

Along with a full card points racing in the Pro and Semi-Pro divisions, Round 9 at Peek ’n Peak will also feature some great battles in the Sport, Women and Junior divisions. The riders in these developmental classes work just as hard during race weekends while enjoying some great quality time with their families.

Conveniently located just a short drive from several major interstate highways, the Peek ’N Peak Resort and Spa is home to winter’s perfect playground. This multi-generational gathering place is ideal for families and groups looking to enjoy the snow on and off the slopes.

Along with a host of restaurants, a ski school, indoor pool and playground, the mountain offers 27 perfectly-groomed trails serviced by eight lifts. Peek ‘N Peak also features miles of cross-country terrain for skiing and snowshoeing. To learn more, go to www.pknpk.com.

East Coast Snocross, presented by Woody’s Traction, AMSOIL and FXR, is the sanctioning body for snowmobile racing in the northeastern United States. ECS maintains a regional circuit intended to keep grass-roots snocross racing healthy in this part of the country, while also cultivating new talent for tomorrow’s factory-backed Pro teams.