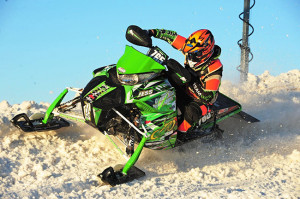 GLYNDON, Minnesota (Dec. 16, 2015) – Despite difficult track conditions brought on by a lack of snow and warm temperatures across the northern plains, Jess Racing competed in the Makita Snocross National, Presented by Country Cat over the weekend at Buffalo River Race Park.

Rounds 3 and 4 of the AMSOIL Championship Snocross (ACS) tour brought success for Montana Jess (Pro Lite) and New York native Jake Scott (Pro Open), with Jess scoring a runner-up finish on Saturday and Scott qualifying for his first Final of the season. Jess’s perseverance and efforts allowed him to maintain the overall points lead, holding a 22-point advantage over Kevin Wallenstein.

“I didn’t have the best of qualifying efforts on Friday, so I had to run the LCQ to get into the final,” a less than satisfied Jess explained. “Starting from the back row is always difficult, but I was able to get up to ninth by the finish. Things went much better on Saturday, qualifying in the top spot and coming home second in the final. I’m thrilled to keep the red plate through the break, and hope to maintain this level of performance at Canterbury. My new Arctic Cat and this team are working well.”

Scott, of Port Jefferson, missed the final on Friday but bounced back with flair on Saturday. The 2013 Pro Lite national champion had finishes of fourth and first in his Heats, then went out and powered his way to 12th in the grueling, 26-lap final. He’s making good progress on his new machine.

“It felt so good to get our program headed in the right direction last weekend,” Scott said after the Finals. “After a rough start to the weekend, things came around for us on Saturday. The sled was ripping off the line and handling that gnarly track pretty well. I was pleased to win a heat, and had hoped to get a little closer to the front in the final. We’re working hard to improve, and I’m encouraged by the gains we made here in Round 4. We’ll enjoy the holiday break with our families before getting back after it in Shakopee.”

Team owner Carl Jess was pleased with the results from Buffalo River Race Park. He knows the athletes were up against some unusual forces over the weekend thanks to Mother Nature.

“That track was about as brutal as I’ve seen in quite some time,” he said. “But ISOC worked hard just to make the race a reality. It was tough on everybody, not just our riders. I’m thrilled to see Montana running so strong in Pro Lite, and I’m happy Jake made a final. We’re off to a good start to our season. Now, if we can continue this pace with Montana in the New Year, life will be good.”

Jess Racing would like to thank its fine group of marketing partners for their continued support, including Arctic Cat, Central Mass Powersports, Woody’s, Arctic Wear, Rox Speed FX and Malibu Boats. We simply could not compete at this level without your assistance.