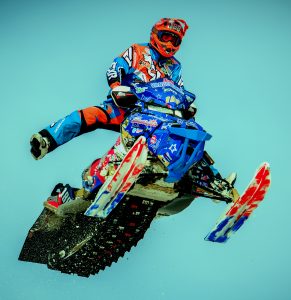 Patenaude (Ingles Performance/Ski-doo), of Hartland, Vermont, stormed to victory in Saturday’s Pro Open final ahead of Team Southside/Polaris teammates Kristoffer Holm and Cody Paolella. On Sunday, Patenaude dominated the 10-lap final on a challenging track as Paolella and Scott VandeBorne (Team Southside/Polaris) filled out the podium.

“It was a great day; I couldn’t ask for much more,” Patenaude said after winning Sunday’s final. “I have to thank my parents and team for the hard work that makes this possible. I’m thrilled for Ski-doo and Ingles Performance, who put so much into my program. I’m glad I had the opportunity to be here.”

Thibodeau, of Rumford, held off Ashley Baird for top honors in Saturday’s Pro Women final. With momentum from her recent podium runs in ISOC national action, Thibodeau rallied past early leader Sabrina Verville in the closing laps on Sunday to complete an impressive sweep. Alissah Ashline and Teresa Max also scored podium finishes in Pro Women finals over the weekend in Bangor.

“It felt great to get such a strong start to the season,” Thibodeau said after completing her sweep. “Now hopefully we can continue to lead the points all season. I had lots of friends and family here this weekend, even one of my teachers, so to sweep my finals for them is pretty rewarding.”

In Pro Lite action, it was Canadian athlete VandeBorne drawing much of the attention. The gifted athlete from Ontario has experience on the CSRA national circuit, and it showed in Bangor. VandeBorne grabbed the all-important holeshot in Saturday’s final and powered his way to victory. Patenaude settled for second, while former Sport class standout Ryan Dupont filled out the podium.

On Sunday, VandeBorne was rocket-fast again and finished second behind Patenaude in the final. Marco Travaglini showed why he was ready to advance into Pro Lite for 2017 with a solid third-place performance. He and fellow Sport graduate Dupont will add excitement to Pro Lite all season.

Action in the MotoTrax Snow Bike class was entertaining, as well. Andy Mathieu, 35, a veteran motocross racer from Lewiston, Maine, rode to victory in Saturday’s final and backed that up with another impressive win on Sunday, completing the weekend sweep aboard his Husqvarna-powered machine. The Snow Bike class continues to grow in popularity among racers while fans quickly embrace this exciting new class of competition.

East Coast Snocross would like to thank Jennifer Khavari and the staff Eastern Maine Community College Foundation for hosting our series a third straight year. The community support from great folks like Dysarts, Darling’s Auto and Lane Construction made the event a reality, and we appreciate the work.
Teams and officials now prepare for the showcase event on the 2017 schedule, a companion race with the ISOC National tour in Salamanca, NY, this coming weekend, Feb. 3-4.

The East Coast Snocross Conx2share series, presented by Woody’s Traction and FXR World Class Outerwear, is an ISR-affiliated sanctioning body for snowmobile snocross in the northeastern states. ECS strives to maintain a healthy level of grassroots racing in this region while also cultivating new talent for tomorrow’s factory-backed professional teams.