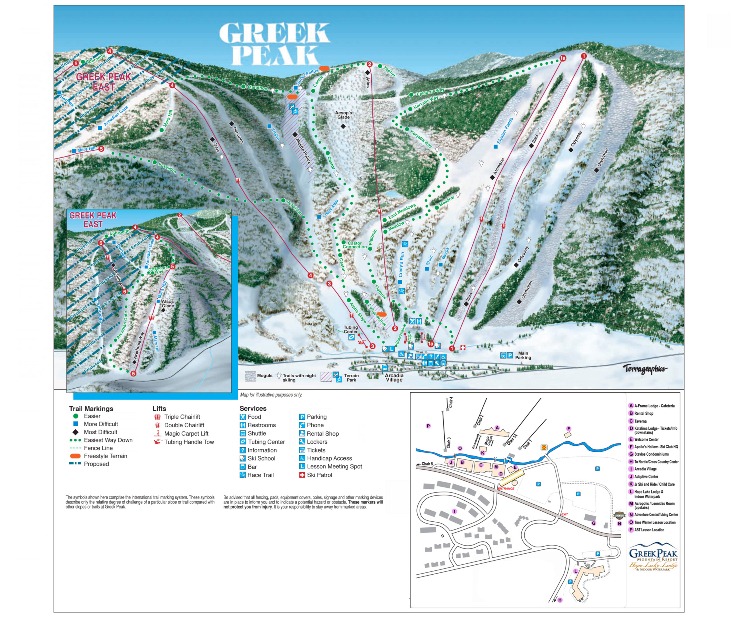 Greek Peak Mountain Resort is a ski resort, with a vertical drop of 952 feet (290 m), located nearCortland, New York. Greek Peak offers day and night skiing 7 days a week from late December until mid March. This mountain features 32 trails with varied terrain. It also has 6 lifts, 2 magic carpet lifts, and a tubing center with a tubing handle tow. A cross country Nordic center featuring 10 trails is also available. A terrain park with various elements is also located on the mountain along with the Progression Park, which is more suited for people just starting out in the parks. Greek Peak also offers lessons for all ages and every level of skier or boarder. They have babysitting available for non-skiing infants and toddlers as well. Greek Peak is also the home of the ski team Greek Peak Ski Club (GPSC) and hosts NASTAR Racing.

Greek Peak was founded in 1958 by Al Kryger. New York’s Governor, Averell Harrimen, conducted the Opening Day ceremonies for the new ski resort. By 1960, two T-Bars had been built and construction had began on a new lodge. In 1962, Kryger was commissioned to build the first chairlift in central New York. Greek Peak then led the industry by developing the idea of offering packages to local schools and colleges. They now accommodate various schools and colleges from around the region during the winter months. In the fall of 2009, the ski area opened Hope Lake Lodge. This includes a 106-unitfractional ownership condo and hotel, 5,500-square-foot (510 m2) Waterfalls Spa, and 41,000-square-foot (3,800 m2) Cascades indoor water park. There are already plans to expand Hope Lake Lodge and the water park beginning in 2011, according to Greek Peak President Al Kryger, along with the addition of a seventh lift and at least four new trails on the southernmost peak for the 2011-12 winter season.