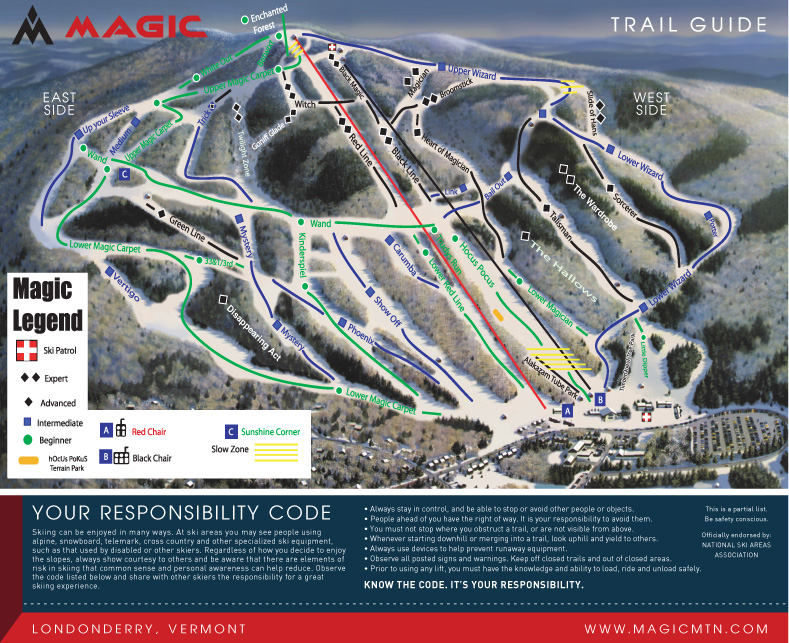 Magic Mountain is a ski resort located on Glebe Mountain in Londonderry, Vermont. It features a 1,700-foot vertical drop. The summit is at 2,850 feet and the base at 1,150 feet. Magic and its base area have a long history, dating from the 1960s. Having experienced a multi-year closure in the 1990s, multiple owners, and existing in the shadows of Bromley Mountain and Stratton Mountain,  Magic has struggled in recent years to remain in operation.

In 1985, Magic Mountain dramatically increased its skiable terrain, by purchasing and connecting the former Timber Ridge ski area. Located on the eastern slope of Glebe Mountain, the area became known as Timberside at Magic.

Magic Mountain and Timberside ceased operations due to bankruptcy in 1991. With the exception of the summit Heron-Poma double chairlift and the Pohlig-Yan triple chairlift, all lifts were removed during liquidation. While Magic Mountain would later reopen for the 1997/1998 ski season, the Timberside area was sold separately and to this day is not lift serviced. There are plans to gradually reopen Timber Ridge as a private ski area.

In 2003, construction was started on a proposed Borvig double chairlift that would follow the same line as the former Poma triple chairlift. To date, the installation has not been completed.

In March 2009, it was announced that Magic Mountain’s management was looking into a cooperative ownership structure to ensure the future operation, maintenance, and development of the ski area. The proposed structure would be similar to that of Mad River Glen.