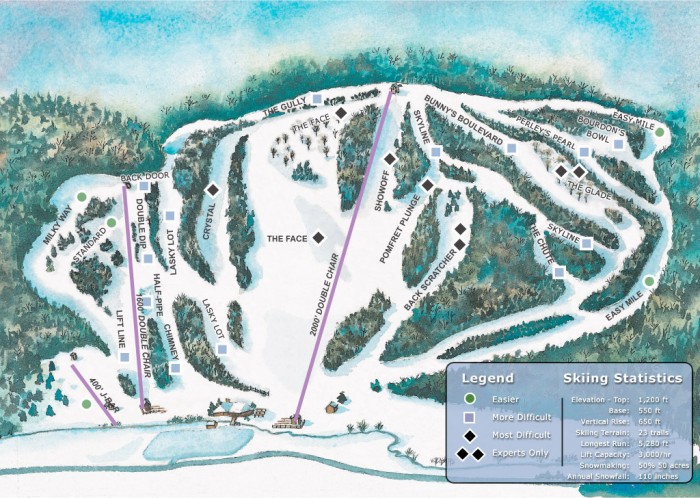 Suicide Six is the name of a ski resort in South Pomfret, Vermont. It has some claim to historical fame as a very early ski resort. In January 1934, an improvised rope tow, said to be the first ski lift in the Eastern United States, was installed on a hill located on Clinton Gilbert’s farm. The rope tow was originally powered with a Ford Model T engine. By the following month, Wallace “Bunny” Bertram (a former ski coach at Dartmouth College who had helped build the original rope lift) took over the operation, and installed a more reliable electric motor. A few years later he moved his operation to a steeper hill nearby, shown on the map as “Hill 6″. Bertram once joked that to ski down the nearby Hill No. 6 would be suicide. Two years later the resort was opened using this name and photos of Bertram can be seen in the resort museum in the base lodge. Devotees of ski mountaineering and backcountry skiing mark this as the beginning of the divergence of resort skiing and traditional backcountry skiing.

Suicide Six was the location of the first National Snow Surfing Championships in 1982, considered an important event in the development of snowboarding as a sport.

Bunny Bertram sold Suicide Six to Laurance Rockefeller in 1961, and it became the ski resort for Rockefeller’s nearby Woodstock Inn. In a 2004 article, the Boston Globe described Suicide Six as “steeped in history”, and now a “low key” location for “a taste of rural skiing”. As of late 2011, when Suicide Six marked its 75th anniversary, the facility included 23 runs and continued to operate as the ski area of the Woodstock Inn.