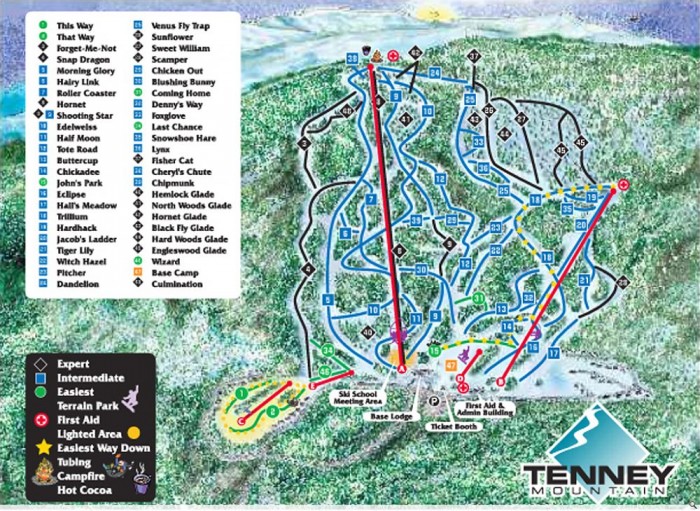 The first trails at the mountain were cut in 1959, and until 1964 operated only T-bar lifts. In 1964, the area constructed a new Stadeli double chair, which made Tenney Mountain the largest ski area in the region. This lift was dubbed the “Hornet Double,” and began operation on 10 January 1965, along with five new trails that it serviced. In 1970, a second double chair was constructed, built by Heron-Poma. This lift was replaced in 1987 by a Borvig triple chair, called the “Eclipse.” This was planned to be followed by a second triple, extending from mid-mountain to a higher summit than the Hornet Double served. Due to a weak real estate market during this time, however, the lift was never constructed, although trails were cut. Tenney was purchased shortly after by Bill Krikorian, who renamed the area Lookout. It was later closed for part of the 1990s, and subsequently reopened under the name of Tenney Mountain.

The area did not open for the 2010/2011 ski season due to financial issues including $200,000 in unpaid taxes. On 15 December 2010, Tenney was sold to Iroquois Capital, an investment firm from New York City. The purchasing price was $500,000, and Iroquois also bought 425 acres (172 ha) of land near the ski area. According to Mitch Kulick, Iroquois’ general counsel, up to six entities were interested in buying the area, potentially allowing it to reopen for the 2011/2012 ski season.