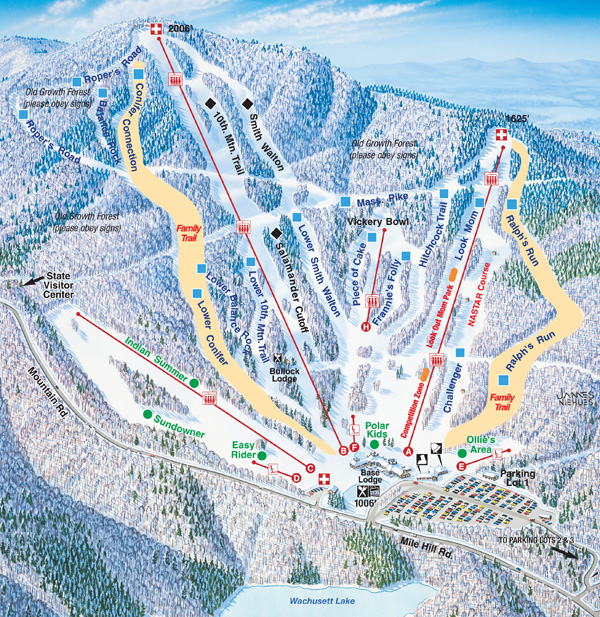 Wachusett Mountain is a ski resort in located on Mount Wachusett in the towns of Princeton and Westminster in Worcester County, Massachusetts.

Wachusett Mountain appeals mostly to commuting skiers from the nearby major cities of Boston, and Worcester, Massachusetts, as it provides a shuttle service to and from a major MBTA commuter stop in nearby Fitchburg, Massachusetts.

Additionally, Wachusett Mountain has night-skiing on most of its trails.

The first ski trails were cut into Mount Wachusett by the Civilian Conservation Corps in the 1930s. Those trails were called Pine Hill trail and Balance Rock. Today skiers can still ski down the upper and lower half of Balance rock. The middle section closed in the 1980s. During World War II, the 10th Mountain Division trained at Wachusett. There is now a plaque at the summit commemorating this. The first lifts installed were a T-bar in 1960 (the Oxbow T-Bar) and in 1962 (the West T-Bar). At the time, the West T-Bar was the longest T-bar in New England, measuring a total of 3,800 feet (1,160 m).

The Massachusetts State Downhill ski championships were run on the Pine Hill Trail until 1966. The race was called off that year after 3 racers were injured, and moved in the years following to the Balance Rock Trail until ski area expansion cut that trail in 1983.

In 1969, Ralph Crowley was granted a lease for a 450-acre (1.8 km2) parcel of land on Mount Wachusett by the state to operate the ski area. In 1982, a major expansion was completed which included the construction of the base lodge.

Stands of old growth hardwood forest on Mount Wachusett became the object of a court ruling in favor of the Commonwealth of Massachusetts in joint contract with the ski area regarding plans for a ski slope expansion into an environmental buffer zone around the old growth stand. The old growth forest contains trees over 350 years old; the buffer zone contained mature trees about half that age. The Sierra Club and other conservation organizations criticized the ruling and two members of Earth First! staged a sit-in protest by climbing into the crowns of several of the trees in the area slated to be clear cut. As of 2007 wording on the website of the Wachusett Mountain Ski Area included strong language prohibiting skiers and snow boarders from entering the old growth area: “Anyone found entering old growth areas will have their lift ticket revoked. Subsequent offenses will be subject to fines.”